Want Best Battery Saving Apps for Android?
You know these days android battery doesn’t work. Most people have an extra battery only for this purpose. Growing uses of social networking apps and heavy games on android takes a lot of battery juice that sometimes you need to charge twice a day. I know you want the best battery saver for android not savers but there is a reason behind that I include 8 battery savers in this list. The reason is outlined below.


This post shows you some of the awesome and top class battery saver tools for your android. Each and every battery saver tool work in their own way. These apps can be found on the major android app stores but in this case I am assuming you are using Google play store to download these application(s). You have to read this if your play store is not working so you can download apps from other major android app stores.

Are These Recommended?
Although I am not a big fan of these apps because almost all android devices include built-in battery saver mechanism. But sometimes the built-in mechanism (app) gonna help you when you’re not using your phone they help your battery stay at what percentage you drop it off using. However third party apps listed below does the same thing with much better and in efficient way, plus they include nice interface for further optimization of your phone.
Why I Include Apps But Not a Single App?

Remember some of these apps mentioned below works well on your device while others don’t, the reason behind this is some apps are optimized for some specific type of devices, think about in this way, every android phone is different both in hardware and software and you know there are tons of android devices available in the market, for this specific reason developers of these apps can’t focus on each and every aspects of a device to make it suitable for a specific device, instead what they do which I also consider way better is they focus on the common things in all android devices so that they come up with a universal best battery saver app for android which everyone can use. Download them all one by one while deleting the previous one can help you better make a decision what app works well for you.

This the the battery saver app from Go Launcher EX. Possesses 4.4 of positive ratings out of 5. It’s very simple and a popular saver. Besides its simplicity it has a nice and cool interface which is tempting. Go Battery Saver gives you the different set of modes so you can use it in your own way, like super power & ultimate power modes. This app also gives you the option to make your own mode just the way you want.

It has been rated as 4.5 in play store and I am currently using it now. Developed by the popular company Cheetah Mobile. Currently the size of the app is 4.5 MB. Find out what’s draining your power. It takes 3 stages to fully charge your mobile phone plus giving the the charging tips. There are many key features in this app like task killer, battery temperature notifier with-in the app, kill apps when screen is off, brightness control, Wifi/Data and bluetooth toggle and much more. It also has the widget.

Personally I didn’t try it out up till now but I include it here because it has been rated good i.e 4.5 and with many positive reviews so I decided why not add it here in this list. DU battery saver has a nice and clean interface with three stages of charging just like the battery doctor. It gives you the information you need such as temperature, voltage, capacity in a nice little graph. Including toolbox to further optimize the power of your phone.

This is very well known battery saver app plus the widget that tells you all the important information regarding your battery. The fun part is it doesn’t tell you that its a battery saver app in its title but if you read the app description you will amazed to see it can manage your battery life as well. I used the app and overall the results are satisfying for me. The developer Tomas Hubalek is very responsive and like to here all the reviews its users gave him to and he intelligently take the advantage fully of the positive and negative reviews so he can make his app more better day by day by solving the bugs his users face. Right now in beta state. By the way it has been rated 4.6, which I have to stand and clap for this :D. Here is the list of all the apps Tomas Hubalek created.

Juice defender has three version two of them are paid. I am including the free version here so that you get the taste of what it can do, so if you satisfy you can download the paid versions available in the store as well. As I told you some battery saver don’t work for you as this one doesn’t work for me, but it doesn’t mean it will not work for you try the app. This app have positive ratings of 4.4. It has some nice features and a clean interface which let you go back and forth option to option. This was my first app as a battery saver.

This is the first app that satisfy me with my battery consumption. It was previously known as the 2X Battery Saver but i don’t know why the developer changed the name from 2X to 2, or maybe it’s a mistake. 2X battery was a good battery saver app for me. It has the nice, simple and clean interface all the things are self explanatory so you don’t have to learn to use the features. Control what you wanna do, when your battery is at low level so you’ll be notified by the app. The free version has the black screen filter which help you save battery plus save your eyes from damaging in the night.

At the time of my writing deep sleep battery has the ratings of 4.2 in play store. It has the nice interface and let you choose from different set of options to save your battery or may extend your battery life. It also give you the widget so you can use it directly from your home screen without even going into the app.

Now for this app I have to say tremendous. Battery save booster is the small app but powerful its like a Superman injected into Super Mario, just kidding :D. Lets look at the infographic what it has to say. 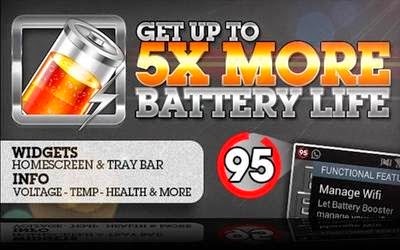 What, 5X more battery life? It’s possible? Well, this sentence is there because it attract more users, but hey I read the reviews and most of them are positive. So I am deciding to use this app because I don’t used it till now. And guess what it has the highest rating of 4.6.

Before you ask the best battery saver for rooted android I thought I have to list it here. It’s called One Power Guard honestly I didn’t use it because I am not a root user, but because of its high ratings of 4.3 among all the root battery savers I feel that I should include this app in here under the heading, For Rooted Android Devices.

Clean Master – Free Optimizer
I do recommend using clean master as the must have tool. This app let you clean your cache which let the system run faster and without getting load to your android. And also there are the bunch of useful options available like uninstalling in a bulk, moving apps to SD card and a built-in memory booster which is another useful feature of this app.

Now that I have listed the apps and done the work 50% other 50% is left which only you can do by using them. Yeah it’s possible that you already using one of these app and the results are not satisfying for you, if this is the case then please comment me below the battery saver app name along with the mobile phone name you’re using so that other readers of this post will know what saver apps work best on what devices.

One more thing to mention which I think is important to tell to you. If you are a all time android user means using it all day long it’s better to have an extra battery charged all the time with you. Although now there is an alternative to have an extra battery, and which I think it will be much better and more effective way for you then the battery, which is called power bank which let you charge your phone on the go. 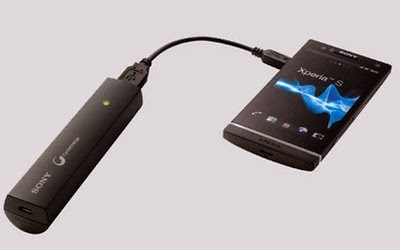 If you are deciding to buy one for yourself and don’t know the technical terms or how to use, what it’s purpose, or to see it is for you or not then this is the post I come across on Facebook which I think will help you get started with power bank, here is the Facebook link. These are the links from which you can buy from Amazon store  Anker® 2nd Gen Astro E3, KMASHI 10000mAh, ZiLu® Smart Power 13000mAh Portable Charger, Vinsic Tulip 3200mAh Power Bank, PowerBot® PB6000 6000mAh Universal Power Bank, Poweradd™ Pilot X1 5200mAh Portable Charger.

I have done the research on what are the great power banks available on the Internet along with the reviews so you don’t have to Google the term “best android power banks“. These are some of the best power banks I come across although there are others more but I think these are enough to list it here.

All the Amazon links listed above are affiliate links which means if you buy one of the power bank from these links I will get the percentage as an affiliate usually under 10% which Amazon will give me.

Q. Are these apps compatible with tablets?
A. Yes they are.

Q. Are these apps work on all versions of android OS(operating system)?
A. Yes they will work in almost every version, but you have to read their description before downloading with you can obtain from app store. They clarify their apps compatibility, that what android versions they support. Most common platforms that most apps are compatible with are ice cream sandwich and jellybean, normally OS with above 4.0+ has the highest compatibility.

Q. Are these apps compatible with every smart phone?
A. Yes they are, like Samsung Galaxy S3, S4, S5, Note 3 and Nexus versions. But as I said previously some apps will work for you and some don’t which I have also mentioned the reason for this above.

If you tried all the saver apps listed here and you’re not satisfied up till now then try other savers as well. There are dozens more savers out there. If nothing gonna work for you try factory default because it’s the last option for you after that you can again download these app(s).